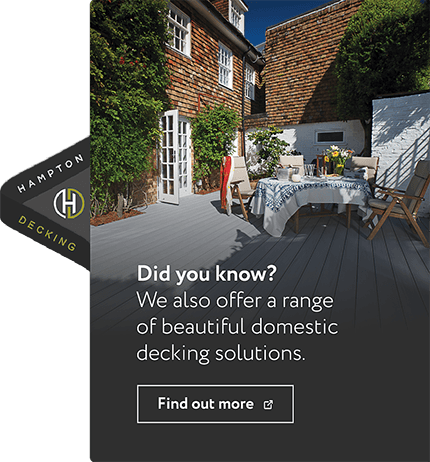 It all started when Mike, Managing Director of The Mayfield Group, went to the cinema with his daughter to watch David Attenborough’s ‘A Life On Our Planet’. Anyone who has seen the film will understand exactly why Mike decided that Mayfield must cut down on their timber use.

In the film, Attenborough tells the story of how two-thirds of the world’s trees have already been cut down and we have 100 years left of our planet if we don’t change the way in which we live our lives.

‘We can all do something to turn this situation around but we must act NOW!’

With those Attenborough words bouncing around in Mike’s head he decided that it was time for Mayfield to act NOW and made a pledge to use less timber in the construction of their decking. As any business will know the design process for any new project has to be meticulously planned. The Mayfield team went above and beyond carrying out extensive research of materials and their sustainability on this project. After a great deal of research Mayfield found a replacement material for timber to use on their Sundecks and are ready to introduce their new, sustainable aluminium decking subframe.

Why We’re Moving Away From Timber

Mass deforestation has a major impact on our planet causing irreparable damage both to climate change and the surrounding forest. For every tree that is cut down a further 20 surrounding trees can be damaged. When hearing these statistics, it’s obvious that things need to change. Mayfield are committed to reducing their impact on our planet by substantially reducing their timber usage setting new industry standards. 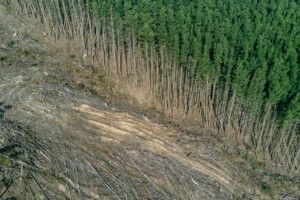 Mayfield already have a low environmental footprint from using 80% recycled uPVC in the majority of their product line up and more recently with 100% recycled polypropylene in their new decking slabs. Mike knows they can do more and believes that moving away from timber for their subframes is the next step to environmentally-friendly decking.

Having an idea is one thing but finding a solution to a problem is another. The Mayfield team looked into several materials to deliver their promise including composite lumber and galvanised steel. After extensive material research aluminium became a clear choice due to its sustainability, availability and cost. Once selected the project moved on to the development stage. Mike tells us about the process in this video.

Mike explains that a lot of thought went into design of the profile for the subframes. When the design was completed it was sent off to be structurally tested through simulation software. The target was to meet British Standards BS6399. Passing with flying colours Mayfield ordered the tooling to make the profile and a sample of the profile was later received for inspection and product sign off.  Upon seeing the sample for the first time it was clear that aluminium was the right choice, the only choice, the perfect choice and the team were on track to achieving their goal of reducing their timber usage and lessen their environmental impact.

After installing the first deck using aluminium subframes word spread fast and the initial stock of aluminium rapidly sold out but don’t worry… there is more on its way. Much more!

Mike says that seeing the aluminium subframes in situ for the first time: “is a bit of a work of art to be honest. When you see it before it’s decked its almost too good to be decked. It just looks fantastic!”

The Mayfield team have chosen aluminium largely due to its environmental credentials. Apart from being a sustainable material and 100% recyclable its also widely-available with in-excess of 60 million tonnes being produced every year.

It’s great to hear that more and more manufacturers are looking into sustainable alternatives to timber. Aluminium is a great choice for decking subframes and have many benefits over timber and other materials.

One of the challenges the Mayfield team faced when looking at alternative materials was fire resistance. While the product had to be a sustainable alternative to timber, it was important that the materials had to have excellent fire-resistant credentials. This ruled out composite materials early on as they have poor if any fire ratings.

Aluminium subframes are completely fireproof and when used with Mayfield’s Hampton decking they have a system that is Class ‘ZERO’ fire rated. They also offer adjustable metal pedestals that cleverly integrate in the subframe profile for the domestic and commercial markets. Both are industry firsts.

Aluminium is both strong and lightweight meeting British standards BS6399 structural load testing. It is easier for installers to handle and manoeuvre. Even large projects such as multi-level decks on a park are easy to manage due to its weight.

Even transporting the frames have benefits as they increase fuel efficiency from decreasing weight load. This further has a positive effect on the environment as we are lowering emissions.

Aluminium is impervious to moisture, insect and fungal attack that other materials suffer from which greatly reduces their lifespan.

Aluminium Oxide and Bauxite (the two main raw materials that make aluminium) does not contain any iron particles (the main raw material in steel) which when exposed to oxygen and moisture rust.

Aluminium is a material that lasts which is great news if your deck is located in a British country garden or on the coast where it will be exposed to the harshest weathering conditions day after day, year after year. It is rot proof and rust resistant.

Materials such as timber and composites sag over time thus greatly reducing their structural properties. Timber sags as a result from moisture and rot. Composites due to it being largely made up from thermoplastics.

Fatigue testing is an important part of the development process when designing a product such as a substructure and Mayfields Aluminium subframe profile design has achieved excellent results showing it will never sag.

Combining our weatherproof decking with an our aluminium subframes will give you a deck that’s built to last and ultra-low to maintain.

While timber remains the cheaper option initially, the lifespan of aluminium is more cost-effective long term as it will not deteriorate from rot or rust. Careful considerations were taken when designing the bracketry that joins the subframes together allowing effective dismantling and rebuilding of the frames when moving from one home to another. A much more cost-effective option than having to replace.

Choosing the right partner to supply the aluminium profile was paramount.  Reliability, stockholding and cost stability was needed. Europe provided the answers through one of Mayfield’s existing suppliers.  Suppliers in China were also considered and were marginally more cost effective but ruled out due ethical environmental credentials.

Mayfield’s aluminium subframes have been designed to be compliant with most decking products. No additional plastic or timber inserts are required for decking screw retention (needed with alternative systems). Mayfield has adopted the much easier ‘Direct-Fix’ system

It’s crazy to think that all this creativity, design and development came from a David Attenborough documentary. What the team has done is simply outstanding. Designing a product from scratch that is sustainable and full of environmental benefits is a huge achievement and one which the Mayfield team are very proud of.

Mike is certain that aluminium subframes will become industry standard for modern decking substructures as did plastic decking when Mayfield first introduced them way back in 1989.

“We still have a long way to go to protect are beautiful planet but using environmentally friendly, sustainable materials and creating products that will last longer and not have to be replaced due to deterioration is moving in the right direction.  We will continue to offer timber subframes until such times that it is no longer sustainable or competitive. We’ve taken these steps and invested in our planets future as a manufacturer we hope our customers will see the benefits of using  aluminium and do the same.”

“The next target for us is moving to Zero timber starting with the reinforcing in our post and balustrades. Being able to offer aluminium subframes as an alternative to timber subframes is a huge step for us but to remove timber completely won’t happen overnight. The Mayfield team feel strongly about becoming a greener company and contributing to the health of the environment we all live in, but price is still a hurdle to overcome as many Brits buy on price unlike much of the rest of the world who buy on value. I’ve seen it first-hand in the many countries I have visited. Its a mindset that we have to overcome and with the right education from our team I feel we can achieve it. We all want a healthier planet right?!?”

To find out more about aluminium decking subframes, or to get a quote for your next project get in touch with the Mayfield team on 01202 233 959 or email them at enquiries@themayfieldgroup.co.uk.